Yudichak, chairman of the Senate Community, Economic & Recreational Development Committee, joined forces with Hutchinson, who chairs the Senate Finance Committee, in championing the sales and use tax exemptions that were approved as part of the state’s 2021-2022 budget.

“Neighboring states, such as Virginia, have created tens of thousands of jobs and leveraged billions in private investment, as a result of data centers,” explained Yudichak. “We have been lagging in recruiting technology corporations to Pennsylvania – it is critical that they have confidence in our technology infrastructure.”

“The strength and resiliency of our technology infrastructure directly impacts our ability to compete for 21st century technology jobs and to attract the world’s technology giants to Pennsylvania,” concluded Yudichak.

Data Centers, such as Iron Mountain, are expected to benefit from the sales and use tax exclusion that was implemented within the budget, as part of Tax Code (House Bill 952 – Oberlander).

Over the last few legislative sessions, Hutchinson has supported the legislation to attract large-scale data center development and jobs to Pennsylvania.

“It’s terrific that so many of my legislative colleagues visited today to see Iron Mountain’s fascinating Boyers underground facility, which is a great representation of the modern data center industry,” said Senator Hutchinson.  “Thanks to the bipartisan leadership and support of these folks, in June the legislature adopted an important economic development tool for Pennsylvania to expand current employment, attract new employers, and remain competitive in the fast-growing data center business segment.”

After being named committee chair earlier this year, Yudichak hosted statewide hearings, to highlight the need for tax and economic incentives to build out Pennsylvania’s technology infrastructure and create jobs. A broad coalition of statewide building trade unions, tech industry leaders, and a bi-partisan group of legislators quickly formed after the hearings in support of building out Pennsylvania’s technology economy, by passing a sales and use tax emption for computer data center development.

As part of those hearings, the committee learned that Pennsylvania was not successfully competing for technology jobs and failed to secure a single enterprise data center in the last decade.

Twenty-nine other states were offering this type of economic incentive.

“The growth rate of data and the digital economy is setting new records every year. With the passage of the sales and use tax exemption for data center equipment, Pennsylvania is able to compete with other states to attract technology and data center investments like the infrastructure our legislators saw at Iron Mountain today,” said Rick Crutchley, Vice President of Iron Mountain North America Data Centers.

“Iron Mountain is dedicated to being a collaborative partner of the Pennsylvania community,” continued Crutchley. “Across our Boyers employee base, we have been fortunate to add almost 200 employees to our team over the past 24 months and expect to add more than 200 additional employees in the upcoming year, in addition to hiring local construction teams to assist with our impending $10 million data center outfits and expansion.  Additionally, data center growth benefits Pennsylvania through increased broadband and power investments.”

Crutchley added: “Iron Mountain is committed to continuing to offset our environmental impact to the local communities that we serve. To that end, Iron Mountain is proud to be the first and largest investor in the Ringer Hill Wind Farm south of Pittsburgh to offset the demands from our data center here as well as investing $5 million to run fiber from Pittsburgh and adding additional electrical capacity for the region.”

The underground Boyers facility occupies approximately 200 acres, within a 1,500-acre mine complex, for operating and supporting data management and document storage business. Iron Mountain employs 275 people in support of business, while Iron Mountain’s customers employ about 2,500 people at the site.

In the past seven years, Iron Mountain has invested over $100 million of capital in the data center and related businesses at the facility. 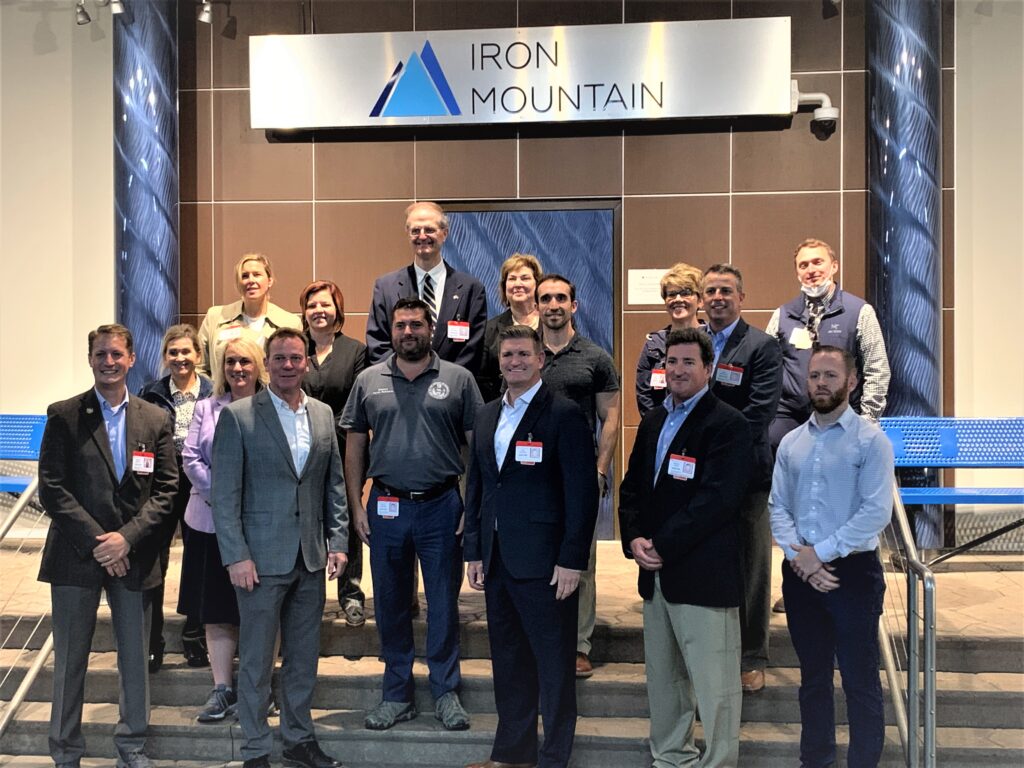